Nice to Virtually Meet You!

Welcome to Ramble Around the World! I’m Jarrod, the guy behind this website geared toward camping, hiking and outdoor travel tips, as well as guides to National Parks, State Parks, cities and other cool places.

As of now, I’m awaiting the all-systems-go for the economy to reopen. Then I’ll be heading out on an indefinite trip across the west coast, where I’ll be car camping and exploring as many amazing National Parks, State Parks and outdoor destinations as humanly possible. Yes, I’ll be living out of my car and relying on a tent, propane stove and a few other essentials to get by. But the exploring part is what I’m focusing on!

For me, travel started when I was just a youngster, a family of five packed in a minivan and cruising to Florida, Texas, the Carolinas and wherever else we decided to ramble once or twice a year. (I wound up falling in love with Florida and moved to Orlando for college in the summer of 2012.)

But pinpointing my love for travel dates back to the time in college when I randomly and impulsively bought a roundtrip flight to Philadelphia (of all places because it was $58) one Thursday and took off on a solo trip the next week. The key words are random and impulsive. It seems most of my travel escapades begin that way. A few months later, a buddy and I flew to Vegas for an 11-day road trip to Sin City, the Grand Canyon, Phoenix, San Diego and Los Angeles. Yup, I had caught the travel bug.

It was during those two trips (I had already launched a now-defunct blog about the St. Louis Blues and was the sports editor at the University of Central Florida’s school newspaper) I came up with the idea for Ramble Around the World.

It took five years, lots of traveling and even more procrastination until I finally launched this blog in March of 2019 — when I was recovering at home from extensive ankle surgery and decided I would use my time wisely, stop procrastinating, write a ton of articles and build a website on the domain name I bought five years prior.

But I’m a firm believer that everything happens for a reason. And, even though ankle surgery knocked me off my feet for about 4.5 months, more good came out of it. My ankle isn’t in constant pain anymore, I launched the blog and my amazing boss let me work from home! (One of the reasons writing intrigued me in school is the flexibility to work remotely and not be tied down to a desk and chair from 9 to 5 every day).

Fast forward again and it’s January of 2020. After working remotely and strengthening my ankle for eight months, I moved out of my apartment, donated and sold everything I didn’t need, temporarily moved back in with my parents to save money and ride out the winter in Florida and planned an epic trip across the U.S. and Canada that was set to begin March 28th.

Well, with everything shut down, we all know the rest of that story for now. But, as I said, everything happens for a reason. And I will hit the road when everything opens up again. I’m relying on small coffee shops for wifi, campgrounds for a place to sleep and many National and State Parks for exploration, so I’m hoping to leave by mid-June at the outside. But we’ll see how the world unfolds in the coming weeks.

Anyway, while I await the journey of a lifetime, here are a few interesting facts about me.

• I have a bachelor’s degree in journalism from the University of Central Florida
• My first jobs out of college were as a journalist for the PGA Tour and Golfweek magazine
• I sold my soul and became a corporate copywriter in 2017 (best decision of my life)
• Eating mac and cheese, fried chicken and brownie batter makes me happy
• I grew up in a small town in Southern Illinois outside of St. Louis (go Blues!)
• I played competitive ice hockey from fifth grade to senior year of high school
• I’m a golf fanatic. If you are too, shoot me a message and we’ll play a round
• I haven’t had a haircut since October of 2019 (Wowza!) 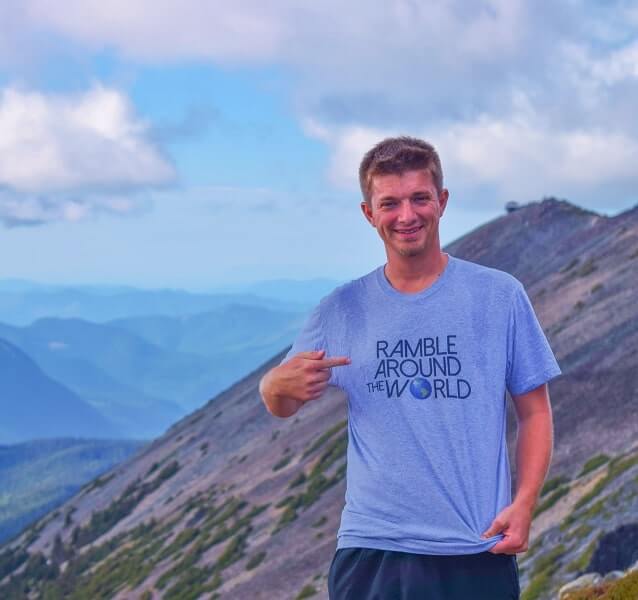 I launched Ramble Around the World to bring accurate, informative information from a first-hand perspective to everyone who wants or needs it. You won’t read anything on this site that I haven’t personally done — but if you do, I clearly state that I didn’t get around to doing it but further researched it to give you an unbiased opinion.

The original motto of this blog was “Travel More, Stress Less” and I firmly believe that motto is still at the core of this website. I’ve just narrowed it down a bit.

For me, life is too short to spend slouched behind a desk Monday through Friday, living for the weekends and federal holidays, as I work up the rungs of the corporate ladder just to make a “comfortable” living.

If that defines you, it’s OK. But let me help you live those weekends and federal holidays outdoors! Because I believe everyone should have the freedom to enjoy living life and not simply living to work. And that’s the mantra I bring to this blog.

Don’t get me wrong, I work more now than I ever have in my life — but being a full-time car camper allows me to trade in monotonously watching TV for soaking in sunrises and sunsets every day, hiking the trails most people dream about, exploring the backcountry and so much more. Simply, living life.

And that’s why the new motto of this blog is “Camping, Hiking & Outdoor Travel Tips.” Not much of a motto, I know. But I want to make sure you know what to expect from this website — and I promise to always bring you the best, most well-researched content on the internet.

Here's the Kind of Content You Can Find on This Site

I absolutely love the outdoors and wouldn’t know what to do if trails, campsites and other tools of the road didn’t exist. I also want the outdoors to stay pristine so the next generations of people can enjoy National Parks, State Parks and other undeveloped pieces of majestically beautiful lands just as we can today.

To spread awareness and help conservation efforts, I donate 5% of this blog’s earnings to the Leave No Trace Center for Outdoor Ethics. The organization helps to protect the outdoors by teaching its tactics and mantra to millions of people each year and cleaning up trash and restoring human impacts on the outdoors across the United States.