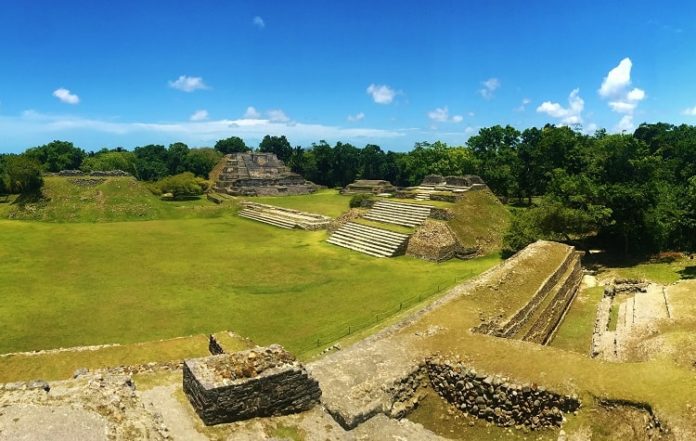 Stepping into the Altun Ha Mayan Ruins, the air was quiet. The mood peaceful. Besides my friend, myself and our tour guide, there was nobody around. We were alone to explore these magnificent Belize ruins.

It was a stark difference between modern times and what the important trading post would’ve been like in 900 B.C., around the time it was founded by the Mayan civilization.

Today, these Belize Mayan Ruins sit at the end of a long unpaved road, about 6 miles west of the Caribbean and 30 miles from the cruise terminal and shipping port in Belize City, Belize.

These days, Altun Ha is better suited for tourists taking a day trip from their cruise terminal in Belize City than it is for living quarters. A mere 40-minute drive separates Altun Ha from people coming into Belize City by air or sea, which makes these Belize Mayan Ruins the perfect destination for everyone’s Belize bucket list.

If you’ve never been to a Mayan Ruin or any other ruins in the world, for that matter, I highly suggest you visit Altun Ha. It’s quite fascinating to see 3,000-year-old cities left behind by ancient generations — and then compare them to our modern society of skyscrapers, blacktop roads and white picket fences.

After visiting Altun Ha, I still find it hard to fathom how these generations of human beings, who share common DNA with all of us, managed to build cities and empires that have lasted for thousands of years, and we can’t even manage to develop buildings that last more than 150 years or control the world’s population or use of plastics.

As our tour guide, Miss Anna, told us, “You can’t want what you don’t know about.”

That statement will always hold true. While technology has, undoubtedly, made our lives easier and more progressive, it has also turned us into a “want, want, want” society that settles for nothing and always thrives for something better.

When the Mayans were trekking from the Caribbean Sea to Altun Ha, carrying goods through 6 miles of dense jungle, they probably wanted instruments better than machetes and a paved road with wheeled carts to haul their goods. Since the beginning of time, the human race has probably always been this way. That’s why we’ve thrived through the years.

Anyway, let’s get back to the Altun Ha Mayan Ruins, which are the most easily accessible and most visited Mayan Ruins in Belize.

What to Expect at the Altun Ha Mayan Ruins in Belize

Unlike many other ruins in the world, hiking is not a necessity to take in and enjoy the Altun Ha Mayan Ruins. A paved sidewalk leads from the parking lot to the main entrance, where it discreetly turns into a flat patch of manicured grass throughout.

You’ll find two plazas, which were used as markets similar to the Sunday morning farmer’s market you likely attended a while back.

These plazas are surrounded by two large burial mounds and three large temple pyramid structures that served as tombs for the high priests and people of importance.

As Miss Anna said, “You’ll have to walk over dead people. But don’t worry about the dead people, they’ll stay dead.” I sure hope the Mayans didn’t practice afterlife curses stricken down upon people who walk over the ancient burial steps.

Altun Ha is one of the smallest known Belize Mayan Ruins to exist. At about 3 square miles, you can easily navigate the entire city in 1.5 hours with a guide or far less if you opt to visit without a guide. I highly recommend getting yourself a guide, though.

This makes Altun Ha the closest Mayan Ruins near Belize City and Caye Caulker, one of the best Mayan Ruins in Belize and, if you’re short on time, the best thing to do during a day trip from Belize City. (Don’t forget to check out the nearby Crooked Tree Wildlife Sanctuary if you have time!)

Miss Anna was incredibly knowledgeable and did a two-person tour for $15 USD. I’m sure we could’ve talked her down a little, but the money was well worth the information and knowledge she provided. She owns a little kiosk near the entrance, so be sure to ask for her if you visit! 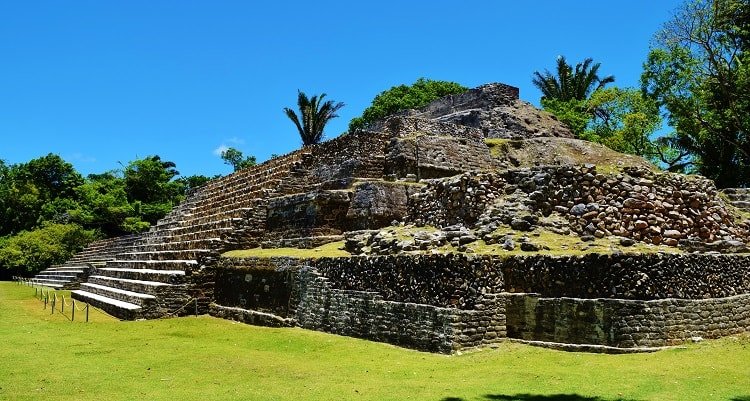 History of the Altun Ha Mayan Ruins in Belize

Although the history is filled with conflicting dates, the Mayan people have been documented to establish Altun Ha as early as 900 B.C. That means the Belize Ruins are nearly 3,000 years old.

Most of the city isn’t actually visible to this day because inhabitants built their homes with resources such as wood and thatch from local palm trees. At its height, Altun Ha is believed to have been a bustling city and trading post with a population of nearly 10,000.

The city of Altun Ha, which is a name dubbed by locals and not the actual given name by the Mayans, differed in some ways from a typical Mayan city. There were no kings in this city. Only high priests who lived lavish lives and served as king-like figures.

It is also widely believed that Altun Ha was deserted due to an act of violence like a revolt against city rulers, who were found buried in tombs with expensive items such as pearls and jade necklaces.

But the most prominent way Altun Ha differed from other Mayan cities in Central America was its collection of jade, a rare and extremely valuable mineral that shone in shades of green.

Jade was a commodity reserved for only the elite Mayans, and they would carve various pictures and symbols into jade stones, which were then used to create necklaces, rings and figurines.

Altun Ha is famous for one particular piece of carved jade. Kinich Ahau, the Maya Sun God Head, weighs in at just under 10 pounds and stands nearly 6 inches tall. It is the largest carved jade object ever found with Mayan roots.

The jade head is so remarkable and one of a kind that it’s kept under 24-hour guard in one of the fortified vaults of the Central Belize Bank, taken out rarely for public showings.

In 1968, it was found by two Belizeans working on excavations in the center of a tomb in the Temple of the Masonry Altars at Altun Ha, along with an older adult male, who is believed to be one of the city’s rulers, and dozens of other high-value items.

Getting to the Altun Ha Mayan Ruins from Belize City

Depending on the size of your party and everyone’s budget, there are four different ways to get from Belize City, Belize to the Altun Ha Mayan Ruins, which is about a 40-minute drive by rental car, taxi or excursion transport.

Renting a car in Belize and driving yourself to Altun Ha is by far the cheapest way to make the trek to Altun Ha. A rental car will run you anywhere from $50 to $100 USD per day and a guide at Altun Ha is pretty cheap. We paid the lovely Miss Anna $15 USD (tipped another $5 USD) for a 1.5-hour guided tour of the Belize Mayan Ruins.

If you’re a solo traveler, taking a taxi to Altun Ha is going to be the most expensive option — and I wouldn’t recommend it at all. However, if you have a group of two or more people, taking a taxi from Belize City will be cheaper than doing an excursion or even renting a car.

There are van taxis that hold up to seven people, but they typically charge you $10 USD per person after two people. Don’t ask me why. I think it’s dumb. Are the extra people really weighing down the vehicle enough to constitute $10 USD in gas each? I think not. Anyway, get a large group and it could wind up being fairly cheap.

If your cruise ship is docking in Belize City and you don’t want to rent a car or get a taxi to Altun Ha, your best bet is to book one of the excursions on the cruise ship, online or once you’re on dry land.

Depending on the size of your group, this is likely going to be the most expensive option, but it’s also the most convenient and provides more than just a visit to Altun Ha.

Excursions include transportation from Belize City to Altun Ha, lunch and a guided tour. If you want to do more, you can pay a little extra to add a tour of Belize City, dabble in cooking local cuisine, cave tubing on the Caves Branch River or various other add ons.

Then you’ll take a bus up the Old Northern Highway to Rock Stone Pond, where a gravel-road turnoff leads to Altun Ha. Since the buses don’t go all the way to Altun Ha, you’ll still have to walk 2 miles to the entrance.

It’s also worth noting that bus service on the Old Northern Highway is quite spotty, and you could be waiting quite a while to catch a chicken bus.

The Altun Ha Mayan Ruins are certainly worth a visit, but it’s really not worth more than a few hours of your time. Besides the ruins, which are small and take a maximum of two hours to navigate, there’s nothing else to do in the area.

My advice is to see the ruins and move on to Crooked Tree, Caye Caulker or one of the other tremendous places Belize has to offer! 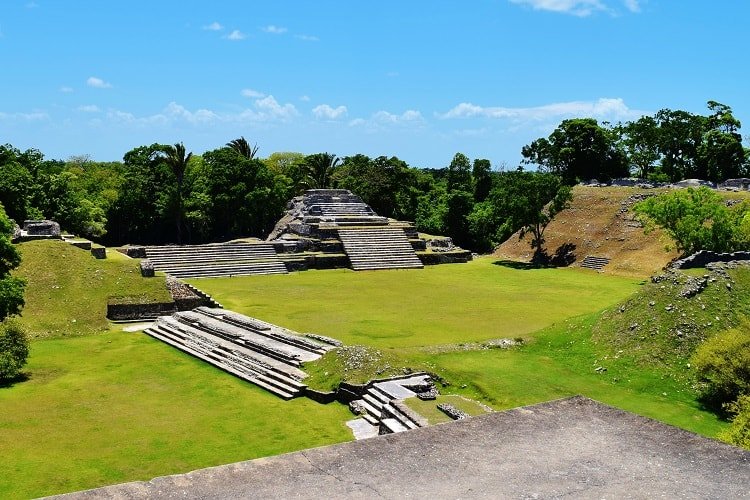 Other Articles You May Find Interesting:

12 Best Things to Do in Caye Caulker, Belize