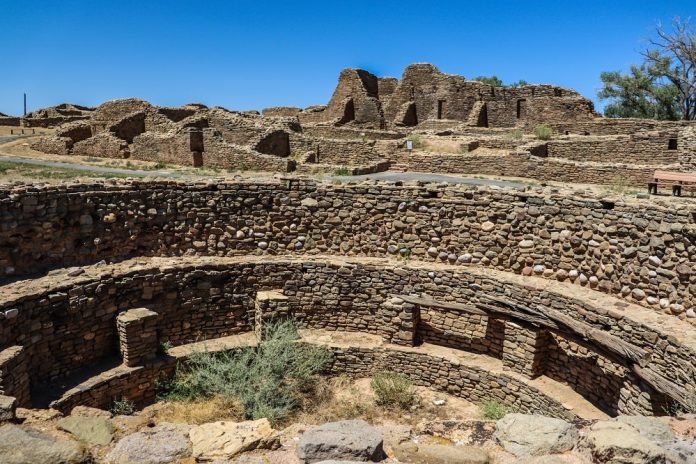 During a 4-day trip through Southwestern Colorado, I nearly skipped visiting Aztec Ruins National Monument between visits to Chimney Rock National Monument and Mesa Verde National Park. Aztec Ruins is located across the state line in New Mexico, but adding it to the trip was only one more hour of driving time.

I’m so glad I squeezed it in because Aztec Ruins National Monument blew my mind. It’s a nearly 1,000-year-old Pueblo Indian site with more than 400 incredibly in-tact rooms built from clay, stone, logs and other materials. Some of the ancient city still has original roofs on the homes, which is extremely uncommon since the roof is typically the first thing to go.

Although ranger-guided tours were suspended due to the pandemic when I visited, they created an audio tour that you can listen to while you explore the ins and outs of the 400-room city. During my 1.5 hours touring these Native American Pueblo ruins in New Mexico, I saw just 10 other people. Let’s take a look at the ways to experience and how to explore Aztec Ruins National Monument.

The first way to experience Aztec Ruins National Monument is by taking the Aztec West self-guided trail, which is a half-mile paved path that follows a series of stops throughout the 400-room city. The National Park Service has done a tremendous job with this tour and has created an audio tour on their website that you can easily follow along with.

The audio tour has about 14 different stops, which are all clearly marked on the trail by numerical order. Through these audio interpretations of the tour, a guide provides you with historical information on the economic, political and social aspects of Aztec Ruins National Monument, which was a central region for the Chaco peoples for centuries.

During the self-guided trail, you walk along a winding path that takes you inside the town’s Great Kiva, a semi-subterranean structure that’s the oldest and largest restored building of its kind at more than 40 feet in diameter.

After exiting the Great Kiva, you wind in and out of multiple structures that were built in the 12th and 13th centuries, as proven by archeological evidence excavated at the site. Toward the end of the trail is when you go deep inside the one-room homes that connect to one another.

This is probably the best part of the self-guided trail because you actually walk underground to get to the back homes that are still covered by the original roofs from 900 to 1,000 years ago. From there, you exit the underground and ascend onto the roofs of two-story homes to get an overarching view of the entire settlement. 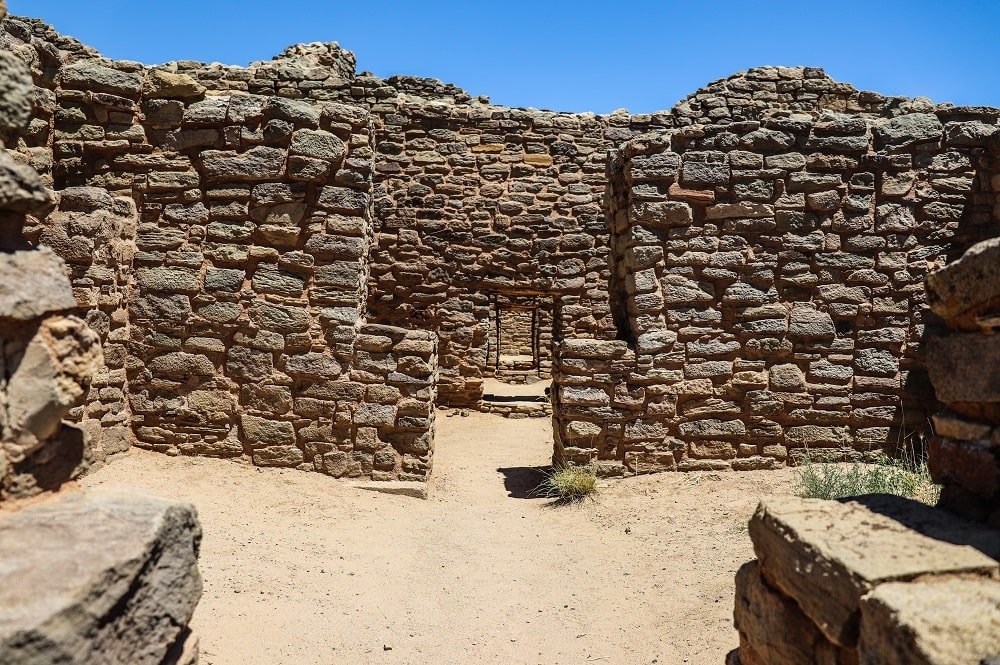 Another unique way to experience Aztec Ruins National Monument is to go on a ranger-guided tour, which is free and offered at designated times from May to September. Ranger-guided tours take you along the same half-mile paved path as the self-guided tour and likely divulge similar information.

Even though I wasn’t able to go on the ranger-guided tour since I visited during the summer of 2020, I’d choose a ranger-guided tour over a self-guided tour at almost any of the National Park Service sites. They give you a more in-depth understanding and typically provide tidbits that you won’t get on your own or with an audio tour.

If you’re lucky enough to visit at the right time — or just choose to do so — you can participate in the monthly full moon walks, evening lectures, American Indian arts demonstrations, astronomy programs and a few other annual events held inside the park.

Special events typically run from June to August. You can check out the park’s calendar to see which events are happening and plan around them. All special events are weather-permitting, so make sure you’re prepared.

The best time of year to visit Aztec Ruins National Monument is undoubtedly June to August, which is when the park holds the majority of its special events. However, ranger-guided tours are offered from May to September, so that’s also a great time to visit. But the park is open year-round, so there is no bad time to visit.

How Long Do You Need at Aztec Ruins National Monument?

At just 318 acres, much of which isn’t excavated, Aztec Ruins National Monument is relatively small and doesn’t take too much time to see. If you’re just doing a self-guided or ranger-guided tour, you can see the entire park in about an hour to an hour and a half.

The only hiking trail inside the park is a 0.5-mile paved path that weaves through and around the ruins. You’ll stop in awe a fair share of times to take in the scenery, but visiting the park won’t take more than 1.5 hours if you’re not taking in any special events.

Aztec Ruins National Monument is open from 9 a.m. to 5 p.m. every day except for Thanksgiving, Christmas and New Year’s Day. Unfortunately, there’s no access to the park after 5 p.m. unless you participate in one of the park’s special events, like the monthly full moon walk or interpretive arts ceremonies.