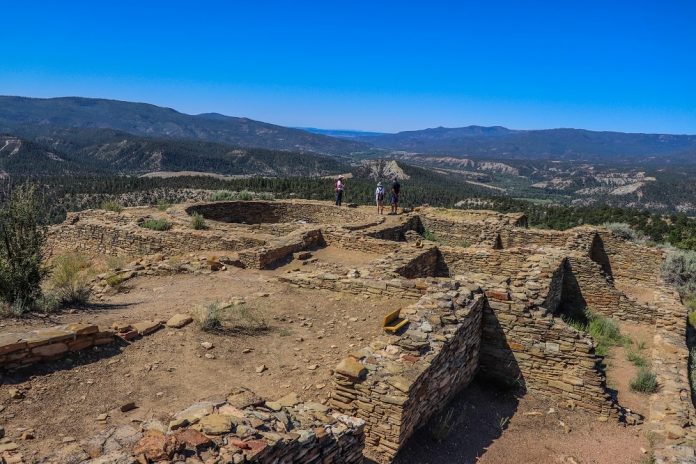 At 7,600 above sea level, the settlement at Chimney Rock National is also the highest elevation Pueblo ruins in the United States. Nobody is quite sure why native Indians, at that time called the Anasazi people, settled here or at such a high elevation.

But it could be due to the vast openness and expansive points of view that allowed them to spot threats and wildlife from afar. My tour guide also told us that each of the major Pueblo settlements of the Four Corners area can be seen from Chimney Rock National Monument on a clear day, so that could be another reason.

Its location at the end of the Rio Grande and San Juan National Forests makes Chimney Rock National Monument slightly remote, but let’s take a look at how you can visit this incredible park filled with hundreds of ruins. 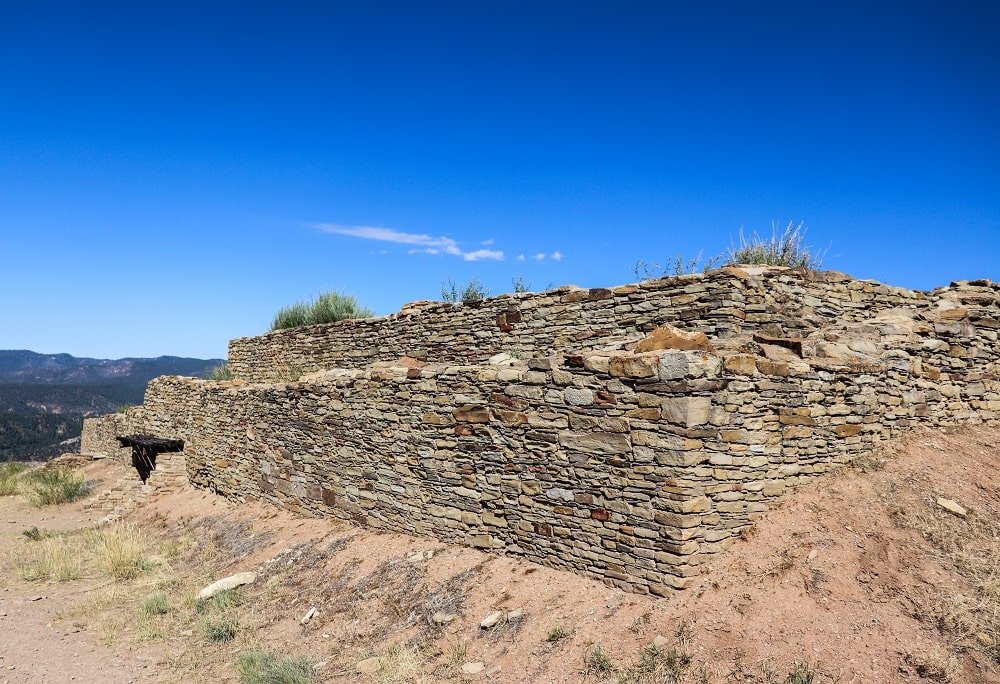 Chimney Rock National Monument is open May 15th to September 30th from 9 a.m. to 4:30 p.m. each day. The tours operate from 9 a.m. to 3:45 p.m., but I highly recommend starting your tour by at least 3 p.m. since the gate closes at 4:30 p.m. sharp and you must drive about 15 minutes each way to the ruins. That means starting your tour at 3 p.m. would still allow you one hour to complete it.

During the 4.5 months Chimney Rock national historic site is open admission is free but you must pay for one of two tour options available if you wish to see the ruins: a guided or self-guided tour. Each tour costs $12 for adults and $6 for children ages 5 to 12. However, if you hold a National Parks Annual Pass, you get 50% off the price of admission, so it comes out to $6 or $3 depending on your age.

Since the Chacoan ruins aren’t visible from the road or the entrance to the park, that means you must take a tour to see them. You can either go on a guided tour or a self-guided tour, which operates from 9 a.m. to 3:45 p.m., with a maximum of 25 people at a time in the ruins.

On the guided tour, a ranger or volunteer takes you through the ancient Pueblo ruins divulging all the cool details you never would’ve known had you taken a version of the self-guided tour. The guided tour lasts roughly 45 minutes to an hour since there are two separate trails and sets of ruins they guide you through.

If you choose to do the self-guided tour, you can pick up an audio device that has a pre-recorded interpretation of everything you’re seeing. But you may miss the peregrine falcons and many other cool tidbits about the ruins. You can also just hike through the ruins without an audio device, which is only recommended if you’ve been here before.

Unfortunately, you can’t reserve any tour dates or times since they’re all first-come, first-served. The last tour is at 3:45 p.m., but I recommend starting earlier due to the 15-minute drive to the ruins each way from the pay station.

The guided and self-guided tours take you through more than 200 Pueblo ruin homes and sites across 4,700 acres that encompass the park. Each tour takes you on the following two trails, which are the only hiking trails inside the park which have ruins.

The Great House Pueblo Trail is the longer and more difficult of the two ruins trails, but it’s only about 1.5 miles in length and gains a few hundred feet of elevation. It also takes you atop the ruins to the Great House Pueblo, which is a massive multi-room structure that was likely used for ceremonies featuring high-ranking members of the tribe.

The Great House Pueblo is definitely the highlight of Chimney Rock National Park. It sits atop the entire village and is directly behind Chimney Rock. It still holds religious significance to the descendants of the settlers, as the winter solstice moon rises directly between the Chimney Rocks every 18.6 years.

However, you can see many single- and multi-family dwellings that have been partially excavated along the way to the top of the Great House Pueblo. 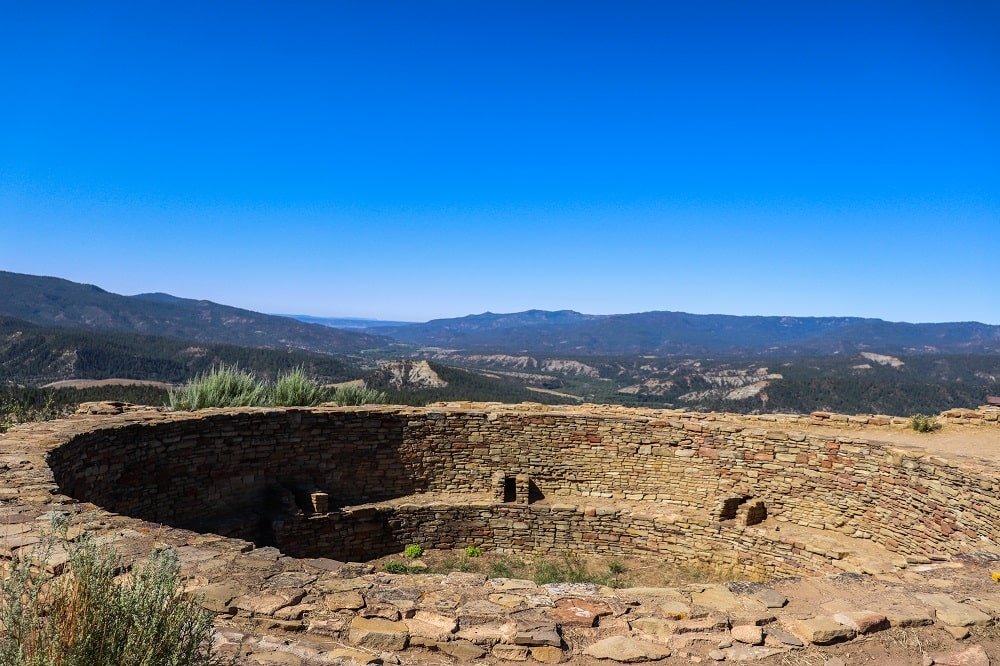 Mesa Village Trail is a 0.33-mile paved trail with expansive overlooks of the Piedra River Valley and several semi-excavated ruins. The highlight of this short trail is by far the fully excavated Great Kiva, which is a circular structure used for religious ceremonies that spans 44 feet wide. 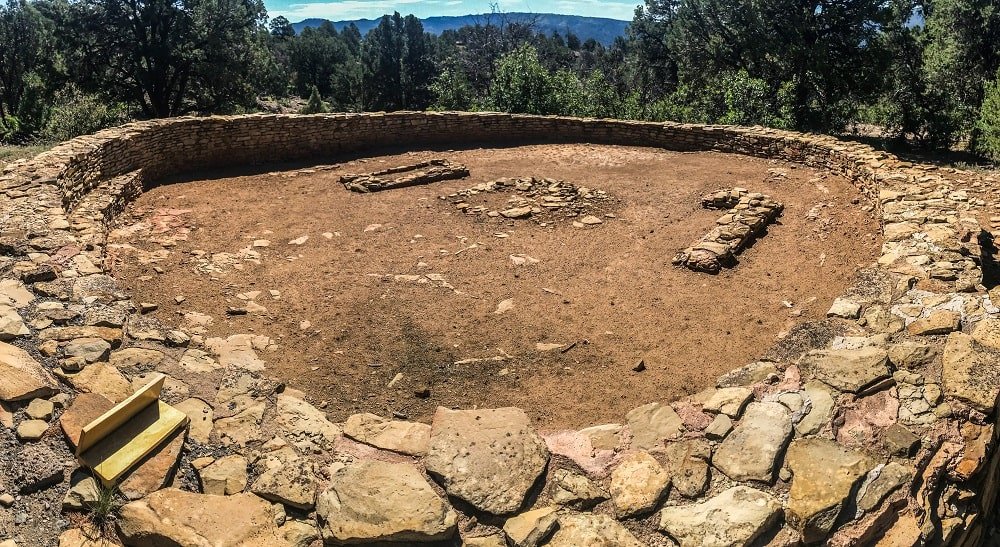