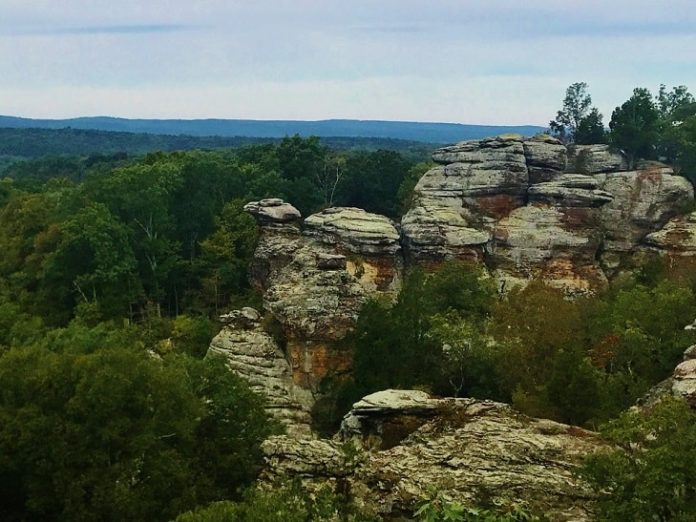 Driving into the Shawnee National Forest’s Garden of the Gods in Southern Illinois, I had no idea what to expect. Growing up about 2.5 hours northwest of Garden of the Gods, I knew the state as being full of prairies and plains, cornfields and wheat, tractors and fertile farm ground.

I only knew of small peaks and plateaus when crossing over the Mississippi River into Missouri. I had no idea there was great hiking or camping in the area.

But Shawnee National Forest is home to rolling hills, lush greenery and small mountains that Coloradans may chuckle at. It’s a splendid place to see if you live in or are visiting the area. It’s about two and half hours outside of St. Louis and three hours from both Nashville, Tennessee and Louisville, Kentucky.

Home to mushroom-, camel- and smokestack-shaped rocks, Garden of the Gods recreation area is open year-round and offers easy hiking trails, camping, picnic areas and many more outdoor activities. Its steep grades and rocky cliffs make it unlike any other place in the state. For those reasons, it’s one of the best things to do in Southern Illinois. 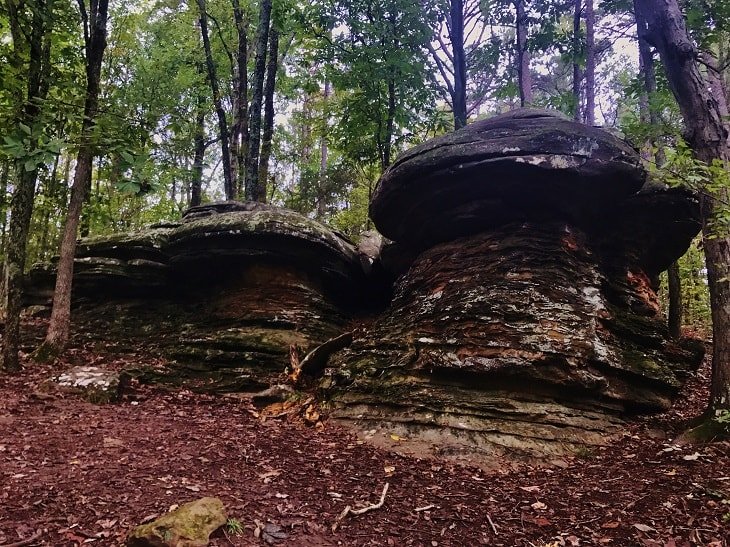 When you get to the first main lookout area on Garden of the Gods Observation Trail, about 10 minutes into the hike, you’ll be able to jump from rock to rock to get the best view of these impressive and steep bluffs, including the coveted Camel Rock, which sits opposite the first lookout.

You can climb down a little ways to grab a unique view that not many people have, but be extremely careful. I wouldn’t recommend doing this if it has recently rained because the rocks can become quite slippery.

Look to the right and you’ll see Camel Rock, which actually looks like a camel with its rocky nose, eyes and humps near the back. This rock is cool because you can walk — and jump — onto its head if you dare to do so.

Keep walking to the second lookout point to get a better, more close-up perspective of this rocky Camel that keeps an eye out over the Shawnee National Forest. While the lookouts aren’t named, you’ll certainly know when you get to each.

The third lookout is on the camel’s back, showcasing a tremendous view of the first and second lookouts, as well as lush greenery and rolling hills in the backdrop. Continue and you’ll be met by a smattering of large rocks that you must walk between.

This is such a cool experience because it really puts the world into perspective of how small humans are compared to the large world. There’s a man-made walkway that leads you through and near a bunch of other large rocks along the way. 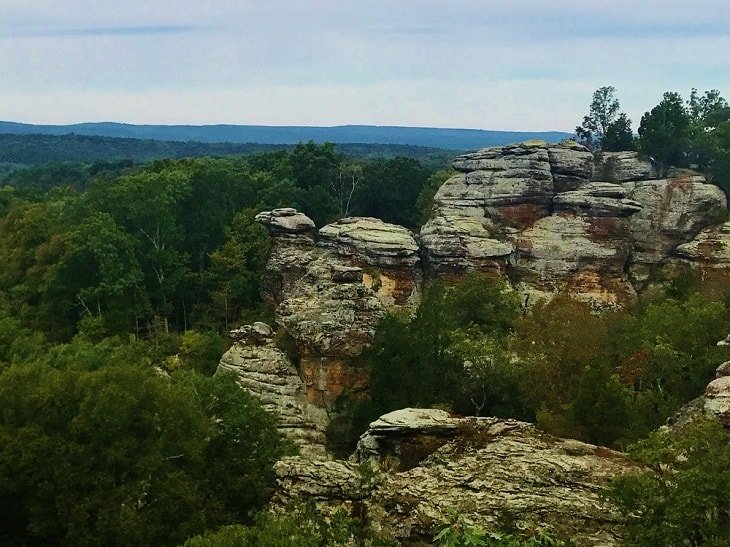 Garden of the Gods in Illinois Hiking Trails

Garden of the Gods has a huge parking lot, accommodating 100 or so vehicles, at its trailheads. All four main trailheads can be found in the parking lot. If you dare, the River to River Trail, a 150-mile out thru-trail that leads from the Ohio River to the Mississippi River, crosses by near the parking lot.

Garden of the Gods Observation Trail

Shawnee National Forest’s garden of the Gods Observation Trail is by far the recreation area’s main attraction. It’s a short quarter-mile loop that takes about 30 minutes to leisurely trek. It’s insanely easy to get from start to finish and it takes you past all those mushroom-shaped rocks, including rim rock, anvil rock and mushroom rock.

Even though it’s a half-mile easy trail, give yourself an hour or so to fully take in the scenery that multiple lookout points have to offer.

Before you get to the main lookout area, there are many splendid lookout points just off the trail that dive straight down from the top of mushroom-shaped rocks. Be extremely cautious when you’re stepping to the edge of each lookout area, as there are no ropes or safety precautions to keep you from falling off the edge.

Garden of the Gods Trail

Garden of the Gods in Illinois Camping

Pharaoh Campground is the only campsite in Garden of the Gods, operating year-round on a first-come, first-served basis with no reservations taken. It costs just $10 per night, per site and the campground is equipped with vault toilets, picnic tables and potable water.

Garden of the Gods recreation area in Illinois’ Shawnee National Forest was tended through time to become a truly beautiful natural attraction in Southern Illinois. If you live within four hours of the forest, you must carve time out of your busy schedule to see these rock formations in person.

I went on a Tuesday morning in early October and there was barely a soul in the entire park, so I’d recommend going sometime around then. Plus, you may be lucky enough to see the changing leaves if you time it perfectly.

If you’re visiting the Shawnee National Forest, you may want to channel your inner pirate on a short drive to Cave-in-Rock, Illinois. It’s about a 30-minute drive due south.